Song Lore Saturday: No Such Thing and One Angry Dwarf Mashup 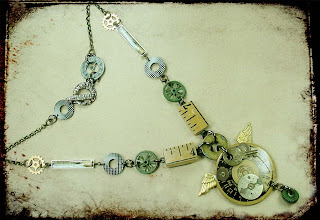 Welcome to this week's Song Lore post and the final school themed post of the series.  Whew!  When I started the series I had three pretty solid ideas but have been at a loss for the fourth to finish the month.  I have been thinking about it all month until today, when I got hit with two song inspirations.  They are somewhat similar in content, so I figured I would combine them and make one necklace. 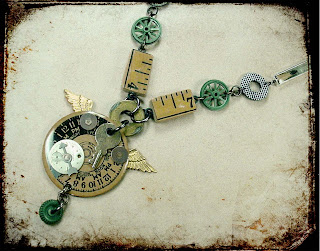 The two songs are "No Such Thing" by John Mayer and "One Angry Dwarf and 200 Solemn Faces" by Ben Folds.  They are both songs that have to do with how school can be a terrible time and not realistic in its expectations.  I think I remembered these songs because I watched some of Dan Savage's "It Gets Better Project" this week, which is a series of short videos aimed at young people in the LGBT community, with older people talking about their experiences, reminding that it gets better when you grow up and get out of school.  I remember being in school and really struggling, and worried that life would always be horrible, so I think this project is really good for people of all kinds. 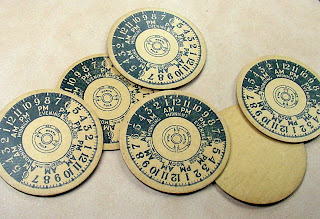 Anyway, the necklace I made is very layered with symbols taken from the songs. (Lyrics here for No Such Thing and One Angry Dwarf) I started with one of the antique globe cards that I got at an antique store.  World globes remind me of school, so I thought it was a good starting point (plus it symbolizes the "real world" from John's song)  I have added a little key that reminds me of a locker padlock key, two beads made from an old ruler (4&7 inches from Ben's song), the pencil links and grid links ("stay inside the lines" and "plot it out in black and white" from John) and some plastic army toy wheels (for the GI Joe reference from Ben)
I am pleased with the result and think it is a kind of surprising design considering the inspiration.  I must say, today felt like my days back in art school (which was SO much better than high school...it DID get better!)  Jeremy is working on a new creative project, too, so there's lots of fun artsy energy flying around today!

Here's John Mayer's "No Such Thing"

and Ben Folds' "One Angry Dwarf and 200 Solemn Faces"