Well, I figured it would happen sooner or later... I woke up on this Saturday morning without a Song Lore post.  Even worse, I am without a solid idea for a post.  I made it through over a half of the year without missing a week, with all that I have had going on!  This week I was busy making beads (...for you!....) and didn't get around to making new things.  So I figured I would do a recap with some of the pieces of the last year that I finished and never showed.  Many of my Saturday posts showed the raw clay, but I finished quite a few of those pieces and have glazed work to show you now.  So here you go: 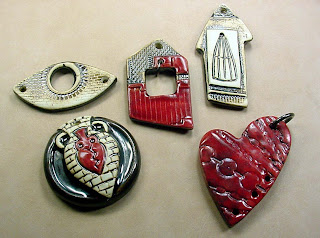 Above, from left to right:
1.One of the finished "eye" pendants from the song inspiration A Thousand Beautiful Things by Annie Lennox.  I am pleased with how they turned out and I sold some of them at the show, too!
2. The broken pot pendant from the song inspiration The Wheel and the Maypole by XTC.  I glazed them all in this colorway, which is just how I envisioned it, and I just love how graphic and juicy the image is!
3. From The Heart of the House by Alanis Morrisette, this is the only house pendant I have left from the series.  Unfortunately, all the hearts I made to go in the windows were too big, so I sold them as-is, hoping people would find their own thing to put in the window.
4. This is the only birdhouse/bird pendant I have left from the Deathcab for Cutie song inspiration Talking Bird.  Clearly, we are seeing a trend of house imagery that I really need to return to.
5. Finally, the chained heart from Tori Amos' Crucify, which was Raku fired. 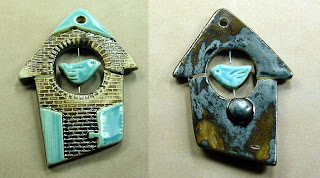 Above: And now one of the disappointments... Everyone was so excited about the Birdhouse in your Soul song inspiration (including myself!) but the end results just didn't work.  Above: Look how the birdhouse split in half during firing!  That was totally unexpected!  I guess the tension of that thin central wire was too much, and it cracked right in half. 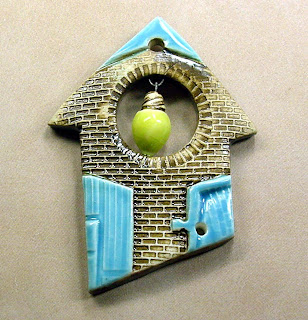 Above: The "nightlight in the window" piece is better, but I didn't estimate the shrinkage well enough, so the lightbulb doesn't dangle in the little hole like I wanted it to do. 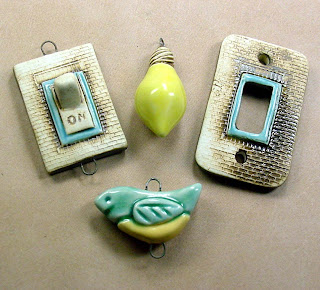 Above: The outlets and switches and canaries turned out ok.  I sold all the little electrical plug outlets.  I would really like to revisit this one and make some changes so that I can get the full set. 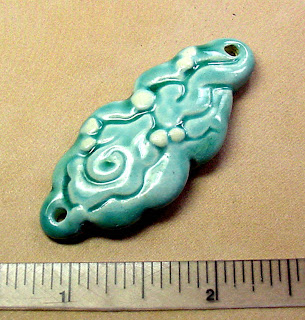 Above: The finished cloud from Bouncing Off Clouds by Tori Amos.  Honestly, I am still a little indifferent about this piece, but it is growing on me, and I think I should make something with it to make me like it more. 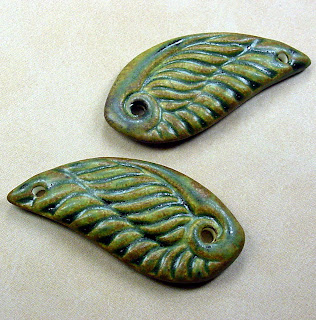 Above: I shall end with a finished pair of wings from Annie Lennox's Little Bird inspiration.  I still haven't molded the I Feel It All wings yet, though.
I'll still choose a song for today.  It is the beginning of the Panic at the Disco album Pretty Odd: a song called We're So Starving.  Sometimes when I sing along, which I often do, I sing "we were busy making BEADS for you!"  hehe.  I have been rather obsessed with this album lately, so I will be doing a real Song Lore post about one of the songs soon.  I just haven't been able to choose just one!