I am very excited about the results of this week's Song Lore inspiration.  The song this week is Paul Simon's "Graceland".  Before I talk about what I made, let me tell you a little about the music.  "Graceland" the album is one of my favorite pieces of music.  When it came out in 1986, it got me (and a million other people) interested in World Music, in part because of the unique sounds of Ladysmith Black Mambazo, who played on the album.  Lyrically and musically, I think the songs flow really well together and tell a story, and it is an album I have played over and over again.  Paul Simon has said that the song "Graceland" is the best he has ever written. It, along with many of the other songs, are about the ending of his marriage with Carrie Fisher. The songs make me think of heartbreak, but also of moving on and enjoying a new journey. I was inspired this week by these lyrics from "Graceland": 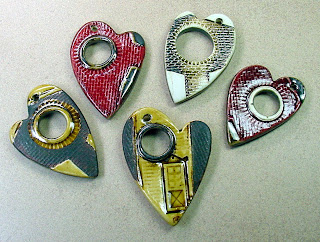 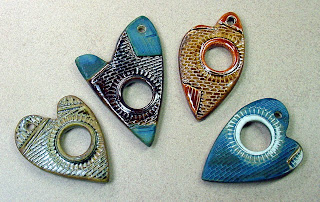 I have always loved that image, of a window in a heart, and I understand the sentiment behind it... feeling like as much as you try to hide the pain that is in your heart (especially during a break up) that everyone can see through you.  Believe me, I felt that very often during the collapse of my marriage.
So I made these heart pendants with windows through them.  The texture on the hearts is from some old model train set pieces that I picked up at a hobby shop.  I hand cut the heart shapes, but I wanted them to be sort of distorted hearts, and I cut a circle out of each heart.  I love them the way they are, but I also want to explore pouring resin into some of the cut-outs, to really have a window effect.  I will work on that this week sometime, and I'll show you if I have any success with it.  I am really happy with these new pieces, and the way I used some of my new crusty glazes, too.

Here is a live version of Paul Simon performing "Graceland"